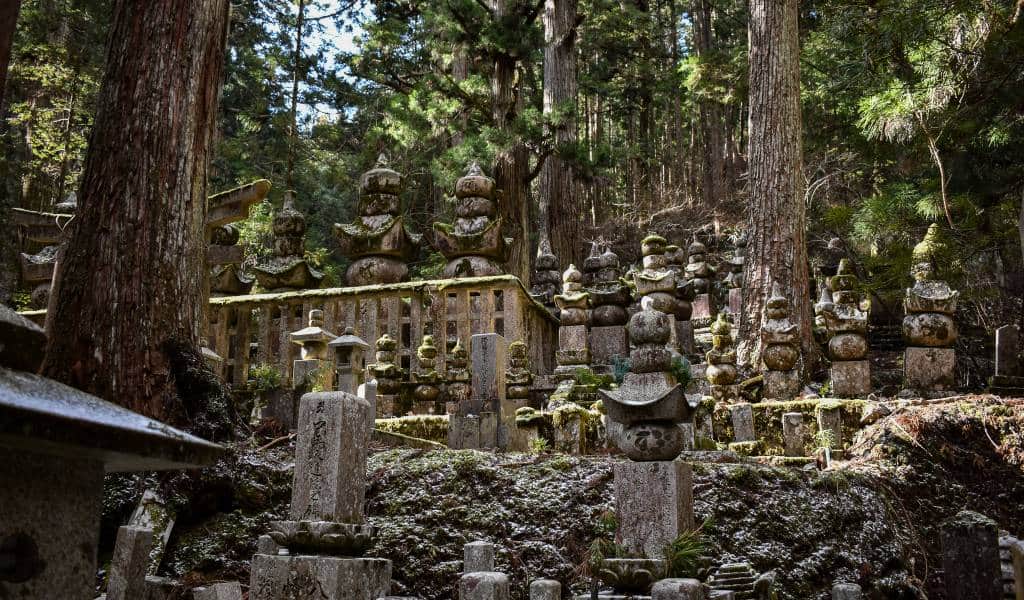 This year, Wakayama Prefecture’s Mt. Koya, or Koyasan in Japanese, is celebrating 1,200 years since renowned Buddhist monk, Kukai (also known as Kobo Daishi), established a monastery over there. Since then, Koyasan has become the central ground of Shingon Buddhism, and a popular pilgrimage site with numerous temples around the area. While it’s not as popular as a tourist spot, it is a quiet getaway from the chaos of urbanity, and it might even help you relax and clear your mind, so it can still be appealing even though you’re not religious or Buddhist. The Koyasan 1200th anniversary celebration is from April 2-May 21, so if you’d like to plan a trip, find out about Koyasan here!

Koyasan is quite easy to get to from Osaka. From Namba or Shin-Imamiya Station, take the Nankai Koya Line to Gokurakubashi (80-100 minutes, 870 or 1,650 yen one-way), after which you take a 5-minute cable car ride (5 minutes, 390 yen one-way) to the mountain, then ride a bus to the town proper. To save money, consider getting a Koyasan World Heritage Ticket. Valid for 2 consecutive days, it gets you round-trip transportation from Namba or Shin-Imamiya to Koyasan (and vice versa—that also covers the cable car), unlimited bus rides around Koyasan, and discounted entry to some attractions. The regular version is 2,860 yen, while the limited express version (a faster ride) is 3,400 yen.

In honor of Koyasan’s 1200th anniversary, foreigners can get a World Heritage Koyasan 1,200th Anniversary Ticket for 1,200 yen, which is valid for 1 day and gets you unlimited rides on all Nankai Lines (yes, not only the line and cable car to Koyasan) and the Nankai Rinkan Bus Line (excluding certain lines, but don’t worry—it’s valid for the line that travels around Koyasan). It’s great for taking a day trip to Koyasan, but you can buy another one, and it’ll still be slightly cheaper than the regular Koyasan World Heritage Ticket. Just show your passport for proof.

While a day trip to Koyasan is feasible, we recommend staying there for the night because of a particular kind of accommodation called shukubo, or temple lodging. It’s not unique to Koyasan, as there are other temples elsewhere that also open their facilities to travelers, but Koyasan is one of the few places where temple lodging is ubiquitous—so much that there’s even a Shukubo Association, if you ever need any assistance with booking, or you need to compare facilities and prices. There are, after all, so many that it’s hard to choose.

One night’s stay costs about 9,000-20,000 yen, depending on the date and/or season. (Some may also charge an extra fee if you’re traveling solo.) For that price, you get Japanese-style bedding and 2 delicious meals. Since these are Buddhist temples, you’ll get to taste an exquisite vegetarian cuisine called shojin ryori (literally, “devotional cuisine”). It’s well-prepared, delicious, and beautifully arranged, so even if you’re not vegetarian or vegan, you’re bound to enjoy it. And no meal at a Koyasan temple is complete without their specialties: gomadofu (tofu made of sesame paste instead of the usual beancurd) and/or koyadofu (freeze-dried tofu). Baths are usually communal, and some temples also have onsen.

Most temples also offer activities such as meditation and sutra calligraphy. In the morning, some temples conduct the goma fire ritual, which involves ritualistic, rhythmic chanting in front of a consecrated fire. Eko-in is one such temple, and they even give sticks on which you can write your wishes and devotions for them to burn during the ceremony. It also conducts the ritual daily, unlike some temples, which only hold it on certain mornings. Having stayed there, I personally recommend it.

What’s there to see in Koyasan? Temples, temples, and more temples! They’re mostly within walking distance from one another, so it’s feasible to walk to most attractions. There’s Okunoin, a huge graveyard in a forest that leads to Kobo Daishi’s mausoleum. It may be a bit strange to hear of a graveyard becoming a tourist spot, but it isn’t as touristy as you think, and as long as you maintain a respectful attitude, there’s nothing distasteful about it. Some of the graves are sights in themselves: famous warlord Oda Nobunaga is buried there; a pesticide company dedicated a grave to all the insects they killed; and some graves even have unconventional headstones. Some temples offer guided night tours of the cemetery, which I also highly recommend. Again, it’s not touristy—it’s not one of those tours in which the guide gives spooky stories. Instead, the guide explains the history of the graveyard and points out notable graves. On some nights, Eko-in holds guided tours in English.

Okunoin aside, visit Kongobuji, the head temple of the Shingon Buddhists; Garan, a complex of temples that Kobo Daishi designed, which has the beautiful Konpon Daito pagoda at its center; the Reihokan Museum; the Tokugawa Mausoleum; Daimon, which used to be the main gate for pilgrims; and Nyonindo, a small temple that used to be the only part of Koyasan where women could worship in ancient times.

Lastly, Koyasan is good for hiking; it has a few trails.

A walking pilgrimage, or Kechien Angya, which involved taking the 2 holy symbols of Koyasan—a replica of a flying Vajra trident that (according to legend) landed on Koyasan after Kobo Daishi threw it to find an ideal location for a Buddhist training ground, and a large trident—around Japan, began in 2014 and ended in early April 2015. Now, those 2 symbols, as well as other sacred artifacts and holy relics, are back in Koyasan and on display at Reihokan Museum. Special enshrined images normally not open for public viewing can be seen at Kongobuji and Danjo Garan, and there are also special services being held daily. Lastly, reconstruction of the Chumon, or central gate of the Garan, which repeatedly burned down in ancient times, finally finished in 2015—after 142 years—in time for Koyasan’s anniversary.

Written by: Tiffany
Filed under: Things to Do | Travel
Tags:
Sharing