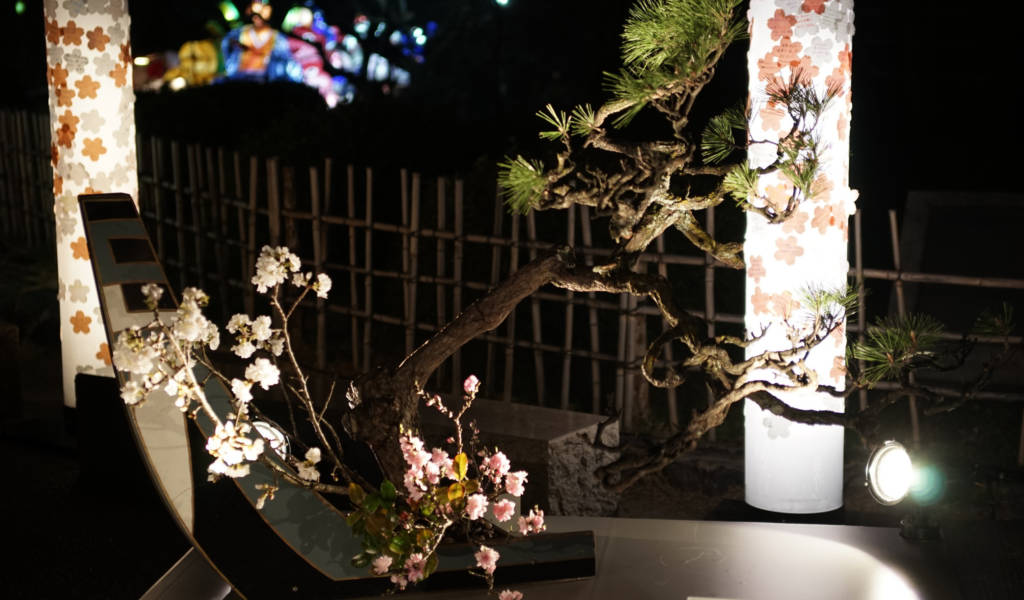 One of the most magical and ethereal sights in Kyoto returns for another year. Hanatouro (literally “flower light path”) starts on March 8 in the Higashiyama district of Kyoto, and will run through to March 17. Meander the ancient back streets of Kyoto along lantern-lit paths in this (mostly) free event.

Each year in the cooler months, the Arashiyama and Higashiyama districts of Kyoto hold special night-time illumination events under the collective name of Hanatouro. Arashiyama’s Hanatouro is held in December and in March, it’s Higashiyama’s turn.

The Higashiyama area is known for its many World Heritage temples and its narrow streets that have maintained their traditional styles. The streets are lit up with (eco-friendly!) lanterns, and many of the temples and shrines themselves are illuminated in the evenings. Round this out with numerous light and art installations, along with many artistic performances, and you have a magical evening in already atmospheric Kyoto.

Small ground lanterns are the key feature of this event (and its namesake). When lined up along the narrow paved streets, they create a beautiful ambiance that makes for a perfect romantic scroll. Some 2500 lanterns line over five kilometres of Higashiyama’s streets, starting from Aokusu Park north of Shoren-in, and tracing a route down to Chawan-zaka, the shopping street that leads to Kiyomizu-dera. The lanterns are lit using LED bulbs, making the event fairly environmentally friendly.

In Maruyama Park, behind Yasaka Shrine, more traditional bamboo lanterns line a stream. The sight has been described as “other-worldly”. The park also features giant lanterns—each four metres high—from the nearby Awata Shrine. These lanterns are usually used as part of the Awata Shrine festival each autumn. Note: walking through the streets and the park is free.

Light installations and the traditional flower-arrangement art of ikebana also feature during Hanatouro. Students from various art universities in Kyoto create light installations that are dotted along the lantern paths. These are accompanied by large ikebana displays, both traditional and contemporary.

You can contribute to the light installations by drawing a lantern design on special paper, which can then be displayed to the public. This activity is limited to the first 100 people to take part each night, at a cost of ¥500. If you don’t want to draw an entire lantern, you can just write a wish on a flower-shaped seal, which is then attached to large lanterns (much like tying your Tanabata wish to a bamboo tree).

It’s not just the streets of Higashiyama that get the light treatment. Many temples and shrines are also lit up to show off their architectural designs and give a sense of power. Unlike the rest of Hanatouro, though, a small fee is charged for entrance to these shrines and temples. That includes the normally free Yasaka Shrine. But many of the lit-up buildings, like Yasaka Pagoda, and the main gate of Kiyomizu-dera, can be seen without entering the grounds.

Many of the temples and shrines offer additional exhibitions, or special openings, along with the illuminations. For example, Yasaka Shrine may have a dance performance by maiko, apprentice geisha, on weekends.

The temples and shrines that are lit up this Hanatouro are:

Keep in mind that prices can change, so be sure to have a little extra with you, just in case.

Along with the maiko dance at Yasaka Shrine, Hanatouro features some other traditional parades and performances. The most unique of these is the Fox Wedding Procession, which traditionally is considered a sign of good fortune. Wish the bride well as she rolls past in a rickshaw!

Local children also uphold old traditions in Hanatouro, by walking along the lantern paths while striking wooden clappers, reminding us all to beware of fire.

The Hanatouro event attracts big crowds every year, especially on weekends, but the beauty of the lanterns in the old streets will cast Kyoto in a new light, and is not to be missed.

While we do our best to ensure it’s correct, information is subject to change. Post originally published in March, 2016. Last updated in February, 2019.