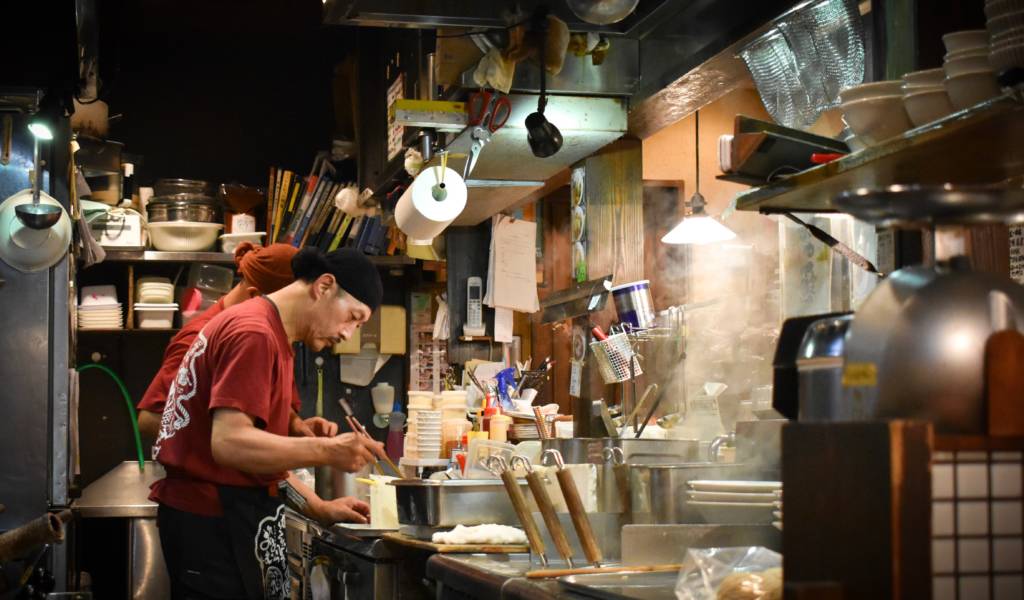 Ramen, like sushi, is a Japanese food that needs no explanation. Typically enjoyed by locals as an easy dish on the go, the old bowl of soup n’ noodles is making quite a resurgence with trendier food-obsessed tourists. Sure, we all know that Ichiran restaurants are great because you don’t have to look at anyone while you’re making a soup splashing mess. And, yes, popular Afuri is worth lining up in the rain for at least once—but if you’re only about the ramen, you’re missing the many more incredible Japanese soup + noodle combos that the country has to offer. Here are just some of the best.

A cuisine favored by some of (literally) Japan’s biggest figures, chanko nabe is sumo wrestlers’ dietary staple—and those guys like to eat, so you know it’s gotta be good. Nabe is a hot pot style mishmash of ingredients, its main base is typically dashi or chicken broth soup. Beyond that, what’s inside typically depends on the chef’s taste.

Given that it’s commonly eaten by wrestlers as part of a regimented weight-gain diet, you can expect plenty of protein like chicken, fish, tofu, and in many cases beef. Sumos also know that eating lots of vegetables will make you grow up big and strong, so there’s plenty of leafy greens like bok choy and other crispy veggies like daikon thrown in the mix too.

An excellent winter comfort food, one of the best places to try chanko nabe is in the Tokyo neighborhood of Ryogoku aka Sumo Town. Because they eat so much of the stuff, many sumos often open up their own chanko nabe restaurants around there.

For the ultimate chanko nabe experience, check out this package where you’ll attend a sumo show, even participate in a friendly match against a real sumo wrestler, then fuel back up again with a big bowl of the hearty stuff.

Technically you could call hoto a hot pot dish too, but it’s very different from the monstrosity that is chanko nabe. Hailing from Yamanashi (Tokyo’s prefectural neighbor to the west), hoto is the cozy combination of flat and wide noodles, and crispy local vegetables served in a salty, warm miso soup.

History states that this, like many great comfort dishes, came from necessity rather than extravagant experimentation because the weather over in Yamanashi proved a somewhat hostile environment for growing crops. As a result, wheat-based products like the udon noodle proved to be a reliable base on which locals could build their diet.

Although we’re referring to them as udon-like in this article, if you were to call them udon in Yamanashi, you may come across a little resistance from the locals, as they’re typically cooked more like your classic dumpling, so to fit in, it’s best to keep that little bit of info in mind.

Don’t know whether you feel like Japanese curry or udon noodles? Well, you don’t have to choose. Japanese chefs have combined two great foods to make a Frankenstein’s monster of a dish that’s as tasty as it is ugly: curry udon.

Thick, chewy udon noodles swimming in a slick bowl of curry-flavored broth, this dish looks like something you’d make at 3am after a big night out. If you want to try a slightly fancier incarnation, pay a visit to Shodai (Address: 1-1-10 Ebisuminami, Shibuya, Tokyo) in Tokyo’s Ebisu neighborhood, which serves its version of curry udon topped with a layer of creamy whipped potato.

Another hybrid of two delicious dishes, kimchi nabe is proof you can’t have too much of a good thing. Although its name would lead you to believe that this one comes courtesy of Korea, it’s actually a local creation which borrows heavily from its spice-loving neighbors. In other words, it’s mainly Japanese ingredients like tofu, gyoza (dumplings) and local vegetables cooked in a spicy kimchi soup.

A dish fit for a king! According to some dubious retellings of local history, Okinawa soba was reported to be the creation of Chinese dignitaries who offered the dish as a token of respect for the service of the late great king of Ryukyu Islands, Sho Shin, in 1543. Savvy history buffs have rebuked this story, however, stating that the dates of the story don’t quite align (other reports claim that Sho Shin died in 1526). Whatever side of history you choose to believe in doesn’t change the fact that Okinawa is home to one of the most delicious soba offerings on the land.

The typical version of the dish features a ramen-like broth containing local ingredients and soba noodles as thick as your standard udon. Like ramen, it comes in a few different forms, including the tsukemen (dipping) style.

You don’t have to be in the beautiful islands of Okinawa to try it out, although it is a great excuse, Tokyo locals should head to Okinawa Soba Yambaru Honten in Shinjuku to give it a taste.

One of the most classic styles of udon dishes is also arguably Japanese culinary simplicity at its best. Kitsune udon is thick, chewy udon noodles in a mild salty broth topped with green onions and sweet aburaage (tofu pockets).

In Japanese, kitsune means fox, but don’t worry you won’t find any fox meat in this dish, the name comes from a Japanese folk tale which states that aburaage was a fox’s favorite food.

It’s found practically everywhere but is most commonly enjoyed late at night or on the go at one of the nation’s omnipresent noodle chain stores.

Ok depending on how much of a ramen purist you are, this may be stretching the ‘not ramen rules’—but if we were going on taste, it’s pretty fair to say your tonkatsu ramen and tomato ramen are two very different beasts. More like a tomato soup, or thin (often cheese filled) spaghetti sauce with noodles, tomato ramen is a newer player on the ramen scene, and it’s becoming a popular substitute to regular ramen given that the broth, which is typically made from tomato and konbu (seaweed), is vegetarian-friendly.