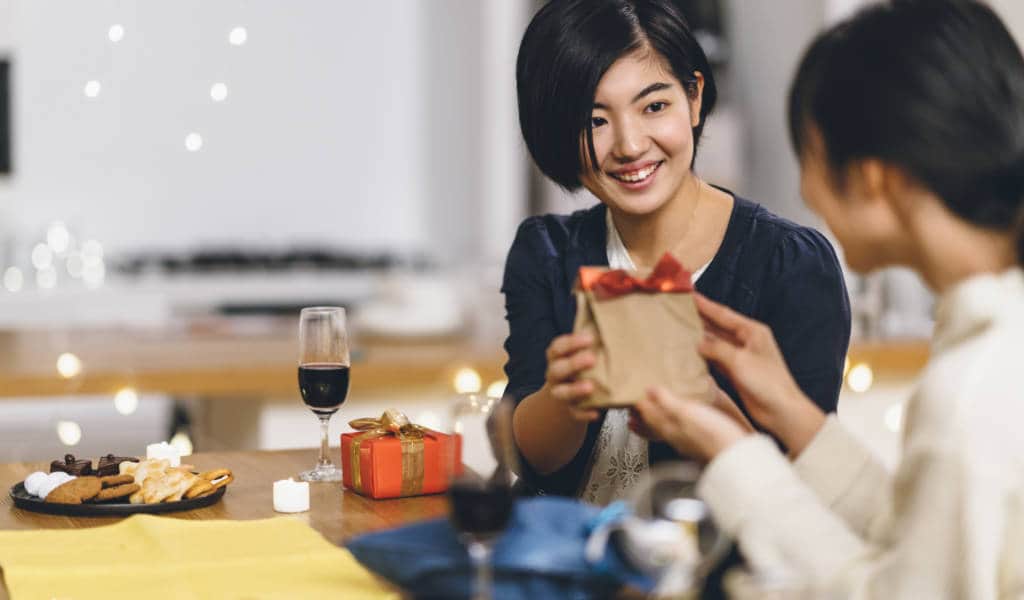 A Mini Guide to Gift Giving in Japan

You may have heard that gift giving is a big deal in Japan. You heard right my friend. There’s something to the ubiquity of gift shops and stationery stores brimming with colorful wrapping paper and ornate cards. But there’s more to the art of gift giving in Japan than pretty wrapping (although that’s very important too), so we put together a mini etiquette guide for you to consider the next time a holiday, birthday or milestone rolls around.

In Japan, oseibo is a gift traditionally exchanged in December, no later than the 20th, to show gratitude to those who have helped you throughout the year. While Christmas has largely taken over the tradition, the older generations still carry on this end-of-year custom. Typical examples of oseibo include packs of fruit, cookies or sake.

Bring on the chocolate

In the 1950s, Japanese confectionery companies started to advertise heart-shaped chocolate in the lead up to Valentine’s Day. Apparently, there was a translation error in one of the advertisements which led to the assumption that only men were on the receiving end of the chocolate. Hence, Valentine’s Day is quite different in Japan, with women treating their romantic male partners to honmei choco and their male coworkers/classmates/teammates to giri choco (obligation chocolate). Don’t worry, ladies, there is a day called White Day in the Japanese calendar where men have the opportunity to reciprocate a chocolatey gift exactly one month later (March 14th).

Revealing the present is the best bit of gift giving in Japan. When you give the gift, always do so with two hands and say the phrase tsumaranai monu desu, which translates to “It’s not much.” Modesty is key here. Don’t be alarmed if your gift is refused, this represents utter politeness in Japan. You may have to try and give the gift twice or even three times before the person on the other end eventually accepts. A good way to practise your Japanese we say!

Omiyage is widely translated as “souvenir” and usually edible in nature. These gifts are not intended for your own consumption, but instead for your family, friends and coworkers who couldn’t attend the trip you were just on. Local products and delicacies are always good options. (Visiting Kyoto? Here’s a guide to some local omiyage sweets.)

Looking for the perfect gift? Consider these sustainable souvenirs.

Fear about the number four

It is believed that Japan has a case of tetraphobia (a fear of things that come in fours). This is simply because one of the two readings for the number is shi, a homonym for the word death in Japanese. Not everyone is caught up in the superstition, but best to err on the side of caution and avoid four-piece gift sets.

How you wrap a gift is just as important as what’s inside. Arguably more important for some. So in the case of gift giving in Japan, outer beauty prevails. Take extreme care if you’re taking on the task yourself; keep it neat and tidy. Better yet, leave it to store clerks if they offer—they’re usually more than happy to wrap your purchase with finesse. Pastel-colored paper or traditional furoshiki cloth are popular wrapping choices. Avoid paper with red and black as that color combo can be associated with sexuality. Ribbons can also be added as a final touch.

The best part of buying a gift is the act of giving it. So when you’re in Japan, or indeed at home, adopt some of those great Japanese traditions that they do so well.