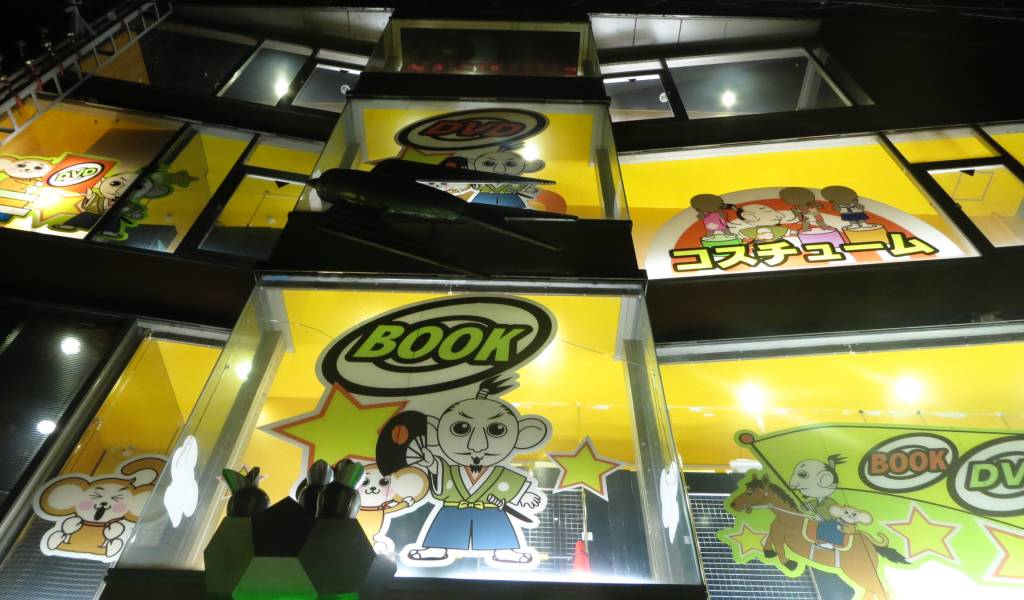 We were in the Shijo Kawaramachi area of Kyoto for a few days, and we got curious about this shop that we’d always pass to and from our hostel. It was called Nobunaga Shoten. Now, shoten means bookstore, and yet the shop’s walls had cartoonish illustrations of the famous warlord Oda Nobunaga doing silly things that’d make him roll in his grave: in a maid outfit, singing karaoke, and so on. “BOOK,” “ANIME,” “COSTUME,” “DVD,” the signs proclaimed. What kind of bookstore—if it even was one—was this, anyway? Somehow our gut feeling told us that it wasn’t an ordinary bookstore. So we stepped in and had a great laugh about how, frankly put, it was a sex shop.

If you think that M’s Pop Life, the 7-storey sex shop in Akihabara is impressive enough, you ain’t seen nothing yet. While Nobunaga Shoten’s Kyoto branch only has four floors, and its other branches in Osaka and Kobe don’t get higher than that, its selection is comparable to that 7-storey shop. Real estate being quite expensive in Tokyo, M’s Pop Life is actually quite narrow, with the merchandise stacked together and little room to move around if there’s a crowd.

But what Nobunaga’s size lacks in length, it makes up for in width. Nobunaga Shoten is huge, and has enough room for customers to move around and freely browse the shop’s selection. In fact, a friend found M’s Pop Life unimpressive because the lack of space made it difficult to look around, but was satisfied with Nobunaga Shoten. We wish we could share photos, but taking photos inside the shop isn’t allowed!

Top tip: For readers in the USA and Canada who are interested in Japanese pleasure products, check out Tenga, an online Japanese adult store that ships internationally.

So if you ever need some, uh, self-love in the Kansai area, you know where to go! Nobunaga Shoten has six branches in Osaka, one branch in Kyoto, and one in Kobe.