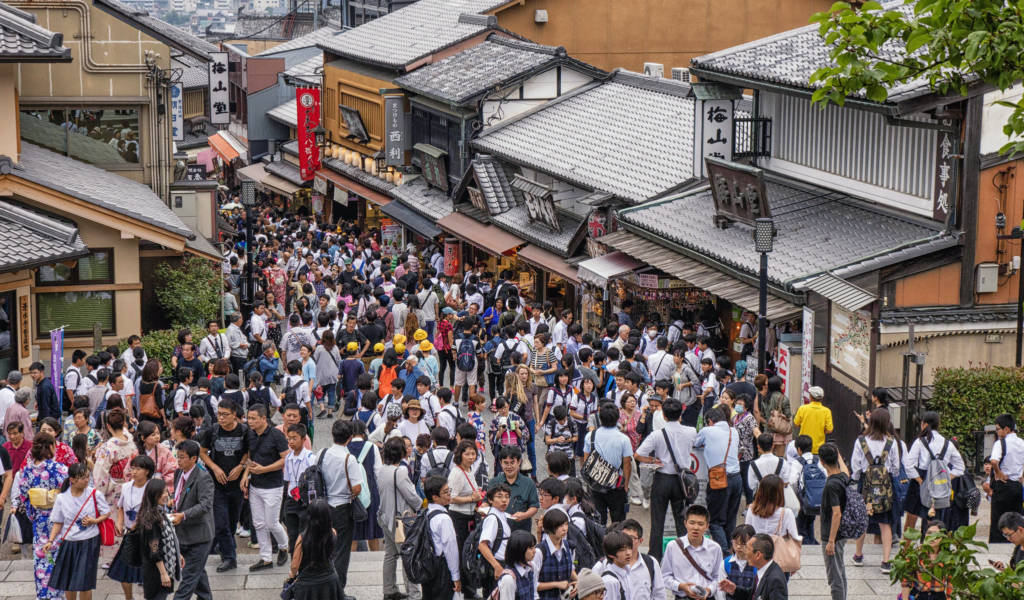 Golden Week is nearly upon us, and in 2019 the holidays span over a whopping 10 days! If you’re in Kyoto, here’s how to have a great staycation instead of escaping on a pricey flight.

Everyone loves a holiday, and Golden Week is one of the biggest in Japan—perfect for visiting hometowns or going on an adventure abroad. Thanks to an extra day and good timing, 2019’s GW is a 10-day mega-holiday, and as soon as it was announced last year, people were keen to make the most of it. Unfortunately, since everyone had the same idea at the same time, flights skyrocketed, Shinkansen seats sold out and even the nightbuses were filled (desperate times indeed). Vacation time is hard to come by in Japan; the work culture is unhealthy and taking actual vacation days is frowned upon, so with the opportunity for an enforced break, many jumped at the chance. While this is a lovely turn of events for the locals, visitors may find a wrench thrown in their holiday plans thanks to thick crowds and higher traveling costs.

So what exactly is Golden Week?

A series of four national holidays clustered together, Golden Week is known as Ogon Shukan (黄金周) in Japanese. While there’s no actual gold involved, the name reflects the good fortune of cluster of national days, with a slightly less prosperous silver week falling in September. The annual holidays that make up golden week are as follows:

Like the proverbial water to wine, a couple of tricks turn this initial four days into ten for 2019. Firstly, the ascension of the new Emperor, Naruhito, will be celebrated with a one-off national holiday on May 1st, making it five days. Then, thanks to a Japanese law, any regular day sandwiched between two national holidays also becomes a holiday, which means that the 30th AND the 2nd also become days off—making it seven days! Add onto that a day in lieu for Children’s Day observance as it falls on a Sunday, tack on the earlier weekend and you’ve got ten days of joy. This is only relevant to this year, however, as each year the dates fall differently.

What to do if you’re in Kyoto:

Golden Week in Kyoto is a weird mix of comings and goings. As a big city there is a high number of workers from other prefectures who will return to their hometowns, but also a lot of Kyotoites who will be heading back, not to mention the sightseers. All in all, it will be busy. If you’re living there or just visiting, this isn’t too big of a deal, you just have to plan a little more carefully and think of some good alternatives for when it all gets too much. Here are three ways to make it a truly golden week:

1. Explore quieter corners of the city

Kyoto is home to over a thousand temples (literally), and while there are some really big names like Kinkakuji and Kiyomizudera, there are plenty of lovely smaller spots too. If you don’t mind some walking, head up to Chorakuji, a temple in the Higashiyama district, behind Gion. The trails climb above the city offering views across Kyoto, with lanterns lit each summer to guide you back down in the evening.

In Arashiyama, you can head out to Otagi Nenbutsu Temple, a statue-filled, moss-covered spot around a 40-minute walk from the bamboo forest. With around 1,200 individually carved statues, the temple’s inhabitants may seem old, but if you look a little closer you’ll see some unusual additions. Carved by visitors alongside head priest Kocho Nishimura, each rakan statue has a different character. You can stop off at the Adashino Nenbutsu Temple and walk up the Saga Toriimoto preserved street on your way to the temple.

If you realllllllly don’t like people and do like planning ahead, then Saihoji is the temple for you. One of the oldest temples associated with Zen Buddhism, it’s known as the moss temple and is over 1,200 years old. To visit, you’ll need to apply in writing well in advance, and pay ¥3,000 on arrival. Despite this, they do still get quite a few applicants, but far fewer than anywhere else.

Taking advantage of the holidays, traditional and more contemporary events will be held throughout Golden Week across Japan. Starting on May 1st, the Kamogawa Odori will begin, offering a chance to see the geiko and maiko (the geisha of Kyoto) perform in full. On May 3rd, Shimogamo-jinja will have a display of horseback archery in the middle of the shrine’s forest—an unusual chance to see some very impressive skills.

If you fancy combining a day trip with something more unusual, head to the Kemari Festival in Nara—an ancient ball sport practiced in full costume on April 29th. From the 3rd to the 5th there’s also the Heijokyo Tempyo Sai festival—a traditional display of costumes, banquets and street performances from May 3rd to the 5th.

So the best way to deal with a busy place is to . . . leave it? Yeah, we think so. There are plenty of great day trips from Kyoto that use local trains and won’t be too busy, so you can head on out without much planning. Famous spots like Nara (filled with deer and daibutsu) and Osaka (a foodie haven) will likely be pretty busy, but are still under an hour away and great to see if you’re just visiting.

Since the weather is pretty nice in early May, you can head to some of our top summer day trip destinations like Amanohashidate. A sandy beach stretching across the Miyazu Bay, it’s known as the bridge to heaven thanks to a special angle you can only achieve if you put your head between your legs.

Alternatively, head out to mount Hiei to see the Enryakuji temple complex and enjoy the refreshing cool of the forest. A UNESCO World Heritage Site, the temple can be reached by hiking or ropeway, depending on how much you fancy mixing the cool forest feel with the sweaty hiking feel. Omihachiman is also a great alternative—nicknamed the Venice of Japan thanks to its canal ways, there’s a relaxing charm and plenty of museums.