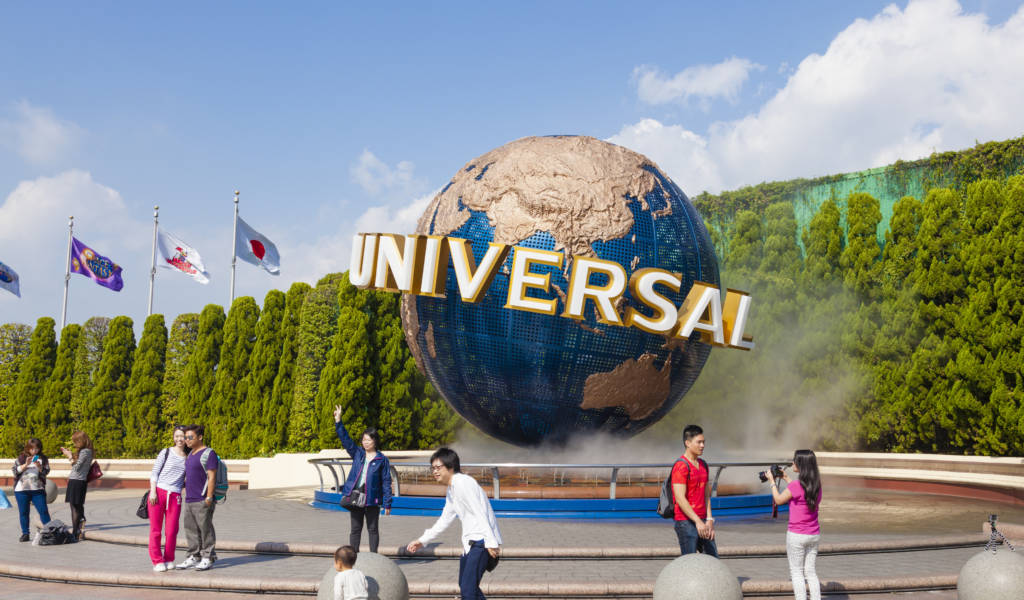 Getting the Most Out of Your Trip to Universal Studios Japan

Universal Studios Japan, or USJ as it’s known for short, isn’t exactly a cheap day out, but it is a popular destination in Osaka, with thousands making the pilgrimage to visit Harry Potter’s Wizarding World along with Shrek, Snoopy, Woody Woodpecker, Sesame Street and the rest of the gang (including the Minions). Plus, USJ’s new Super Nintendo World opened in 2021. There’s a lot to enjoy, whatever your age or taste in entertainment.

First off, we’ll give you a quick idea of what to expect at USJ in Osaka. Then we’ll get you ready to roll with our tried and tested tips and tricks to save money and time on your visit, and have the most fun possible.

Need USJ tickets? You can buy them from official USJ partner Klook.

The Minions, The Wizarding World of Harry Potter and other major attractions at Universal Studios Japan

If you’re a fan of the cheeky yellow characters from Despicable Me, you’ll be thrilled to hear that they are a feature of the theme park. At the aptly named Minion Park, you’ll be able to see shows, buy Minion-themed stuff, eat Minion-themed food, and try out the “Despicable Me Minion Mayhem” ride.

Of course, you can also enjoy the usual suspects like The Wizarding World of Harry Potter (including Butter Beer), Hollywood Dream, Jurassic Park, Jaws, Attack on Titan, Spider-Man 4K3D, Space Fantasy and more. The newsest area – Super Nintendo World – is a joy for video-game fans and lets you experience Mario Kart in real life, plus a few other new attractions including the impressive Yoshi’s Adventure.

You might have heard about the Cool Japan Zone, where hits from Japanese anime and cinema have been turned into attractions of varying thrill levels for seven years running. Current shows feature Sailor Moon, Detective Conan and Attack on Titan among others. This part of the park is open for specific parts of the year – thanks to Covid this has shifted from the first half to a period between March and August.

Come fall, you can experience terror, screaming and other good fun as part of Universal Studios Japan’s annual Halloween special. Zombie mobs, manic mazes and other dark delights add an extra element to evenings at the theme park.

For families and those with younger children, Universal Wonderland is the place to be. The area has three main sections: Snoopy Studios, Hello Kitty Fashion Avenue and Sesame Street Fun World. With dozens of rides and interactive experiences there is plenty here to entertain the kids and an option to book the free timed ride tickets to reduce time in the line (and who doesn’t love that).

How to stretch your yen at Universal Studios Japan

Whether you’re going for Harry Potter, the Minions, a Biohazard event or another thrill at USJ, the fact that you’re reading this tells us you’re all about saving those yens. So here are a few suggestions to reduce the impact of a Universal Studios Japan excursion on your billfold and stress levels. And we’re not just talking about USJ discount tickets—though those are a good start.

The regular entry fee is about ¥8,400 for a 1-Day Studio Pass for an adult, but prices vary by the day—so you could end up spending a bit more, or a bit less, for your USJ ticket. For reference, children’s tickets are ¥5 with seniors coming in half way at ¥7,600.

If you’re going to be making the trip to USJ in Osaka from Tokyo, a package deal like a round-trip bus + studio pass, with a night at a hotel as an optional add-on, might prove most economical. It’s worth having a look at the combo deals on Willer when planning your Universal Japan trip.

A number of reduced-price entry tickets are available for Universal Studios Japan, notably for birthday boys and girls (of all ages) and differently abled visitors. You can scoop special passes for the latest attractions, as well as multi-day tickets, on the Japanese website. While there is talk of a USJ Club around – it isn’t the kind of club that gives discounts, it’s simply the name of the free account you’ll need to make to but tickets online (sorry!).

If you’re looking to book in English, you can get your USJ Studio Pass quickly and easily through Klook, an official USJ partner.

Discount ticket shops (called kinken) and vending machines are a good place to save a few hundred yen on your Universal Studios Japan entry pass, but can be complicated. Usually you can save 5–10% off the retail price, but some Japanese ability is needed. You probably won’t save enough to warrant making a special subway trip, so if there isn’t a ticket shop near you, it’s probably not worth it. If you’ve noticed one nearby though, it could be good for as much as ¥500 off the regular price.

Do I need a Universal Studios Japan Express Pass?

If you really value your time, then an express pass, which allows you to skip the queues, might be worth the extra investment. On busy days, the wait for popular attractions can be from one to three hours

If visiting during special seasonal events at USJ, like Halloween Horror Night, or with very impatient smaller children, an Express Pass is strongly recommended to make sure you can enjoy all of the limited-edition attractions.

Planning your day at USJ Osaka ahead of time

If you choose to save your dosh and forego the Express Pass, you may need to spend some time planning your itinerary. If you’re doing a full day at Universal Studios Japan and haven’t bought tickets in advance, it’s best to show up early, as long queues can form at the ticket gates, which open an hour ahead of the park’s opening time.

The 4D shows at USJ, meaning moving seats and spurts of water and air among other things, run on strict timetables, so if you’re interested in seeing a few, it’s best to plan your day around them. Note that the movies are mostly only in Japanese, with a few subtitled bits.

Additionally, several attractions (like the Wizarding World of Harry Potter and Super Nintendo World) have timed entry tickets or numbered entry tickets that you have to obtain (for free) in advance through the official website or app. Between the shows and the timed attractions, it’s best to plan when you are going to visit each one, then go and enjoy other attractions in the meantime.

There’s the Universal Japan Studios App if you read Japanese; otherwise you might want to spend some time with a map familiarizing yourself with the layout and what you want to see. It is particularly handy for checking out the current wait times on the most popular rides (it gives pretty accurate wait times too) and strategically planning your day around main attractions and special events. Finally, the attractions and most of the restaurants close before the souvenir shops, so if you want to maximize your ride time, you may want to leave your shopping until the end of the day.

The operation hours for USJ vary depending on the season and day, but generally speaking are from 10 am to 7 pm, give or take an hour or two. In spring and summer, the park is usually open a bit later, until 8 or 9pm. Check the official website before your visit. Any COVID-19-related updates will also be posted on the site.

Where to eat at USJ

The food at Universal Studios Japan can be seriously expensive. You’re looking at something like ¥2,500 for a food cart item, or a cheaper ¥1,200 for a pre-made cafeteria sandwich (and let’s not even talk about tea and other beverages). You might want to splurge on a few specialty items (a glass of Butterbeer, anyone?), but it’s good to keep in mind that there are regularly priced restaurants right outside the park entrance, including curry spots, sushi go-rounds, and the typical fast food joints. There are convenience stores for a rice ball fix too.

Be warned, though, that USJ tickets are single-entry: once you leave, you can’t re-enter on the same pass. Our advice? Fill up before you go in, or chow down before you take the train home.

Can you bring food into Universal Studios Japan?

You can take 500ml of bottled water or a thermos into the park, but no other beverages or food, except for baby food and snacks for the kids.

What station is Universal Studios Japan?

USJ is a short walk from Universal City Station on the JR Sakurajima train line. If you have a JR Pass, you can use it to get there.

How do you get to Universal Studios Japan?

Universal City Station is 10–15 minutes from Osaka Station, making it easily accessible from the city center. You can hop on the Osaka Loop Line and change over to the Sakurajima (aka Yumesaki) Line at Nishikujo Station.

USJ is also just under an hour from Kyoto Station. If you’re coming from Tokyo, see our Tokyo to Osaka travel guide.

If you’re wanting to spend the night near Universal Studios Japan, The Park Front Hotel and Hotel Keihan USJ are convenient, comfortable options.

You can also try these other Osaka accommodation ideas if you don’t need to be that close to the park.

Exploring the rest of Osaka

Don’t forget to spend some time in Osaka proper, a fabulous part of Japan in its own right. From castles complete with samurai stuff to some of the best food you’ll ever eat (okonomiyaki, ramen, gyoza and much more), as well as massive green spaces (think Expo ’70 Memorial Park in Suita City) and 24/7 hot spring theme parks (Spa World), Osaka has it all.

You ask, we answer.

What is the best day to go to Universal Studios Japan?

Try to go on a weekday. Monday through Friday tends to be less hectic than weekends and holidays, though still crowded.

Yes, USJ is open. COVID-19 protocols are in place to ensure safety.

Is one day enough for Universal Studios Japan?

For most people, one day is enough for USJ in Osaka. If you get there early, you can make a full day of it. If you are planning to go during a busy period, for example, Halloween, you will probably want to buy an Express Pass, however, to minimize wait times for the rides and attractions.

If you simply can’t get enough of USJ, there are 1.5 Day and 2-Day Studio Passes too.

Is USJ worth it?

If you like theme parks, then almost certainly. USJ ranks highly as a must-do on Japan travel bucket lists.

Can you cosplay at Universal Studios Japan?

Yes, you can dress up at USJ. However, you are not allowed to wear costumes that are indecent (think lots of skin), headgear, prosthetic face make-up or full-face masks (basically anything that covers more than half of your face), costumes that may be dangerous, costumes that are excessively frightening (think children running away and crying), or costumes that impersonate park staff.

When does the Donkey Kong Area Open

The Donkey Kong expansion area is set to open inside the Super Nintendo World in 2024. There’s set to be a rollercoaster, interactive attractions and food options, all in the very familiar jungles of our collective childhoods.

While we do our best to make sure the information provided here is correct, it is subject to change. This post was last updated in July, 2022 by the editorial team.