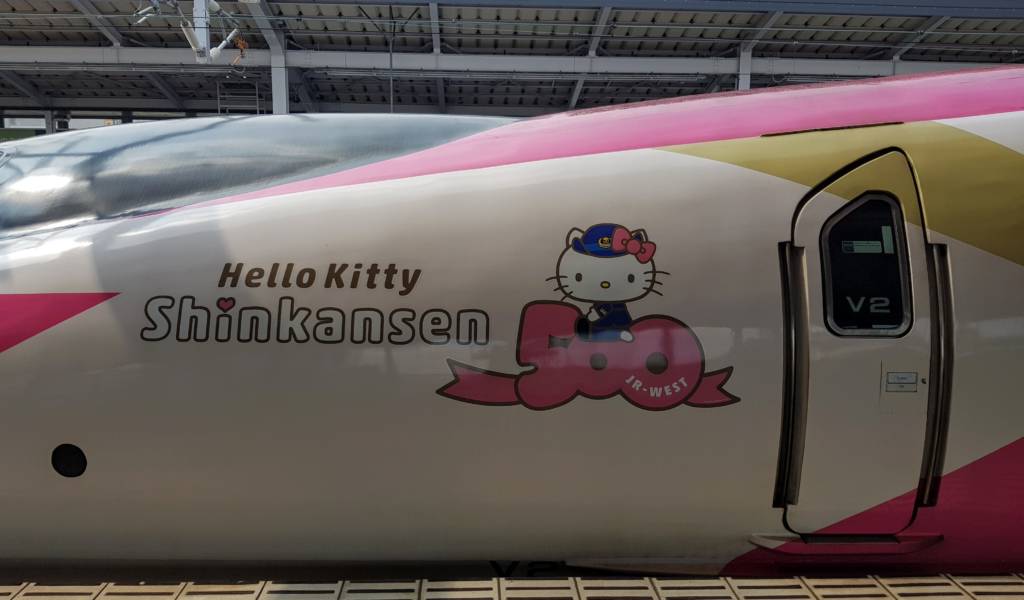 Combining two quintessentially Japanese things into one easy jaunt, the Hello Kitty bullet train is a gloriously pink way to get from A to B.

When the bullet train with the fetching pink paint job and Hello Kitty decals rolls into the station, there is no mistaking it for any other train on the network.

Started as a collaboration between Hello Kitty creators Sanrio and JR West in 2018, the Hello Kitty Shinkansen is a single train set that plies the Hakata (Fukuoka) to Shin-Osaka route once each day in both directions.

Although there are decals and small touches throughout all eight carriages, most of the action happens in carriages one and two (at the front leaving Shin-Osaka or at the rear if leaving Hakata).

Carriage 1 is given over to a Sanrio shop called Hello! Plaza with three uniformed attendants and all manner of Hello Kitty merchandise—including limited-edition station master Kitty-chan.

If you visit the shop in the first carriage, you’ll get a souvenir “short story” booklet that you can sell on eBay for at least a dollar. Aside from the plush toys, there are lots of snacks and smaller items for the kids. If you’re in Tokyo and can’t make it, fear not—there’s a whole Sanrio theme park with Hello Kitty and all her friends.

If you want the experience for the whole trip, you’ll have to board the Kawaii Room, located in Carriage 2—the only passenger carriage that is fully decked out with Kitty-themed flooring, seats and window shades.

At the back of the carriage is an area for taking those all important commemorative photos.

When and where to catch the Hello Kitty Shinkansen

The Hello Kitty Shinkansen is a regular Kodama service that runs from Hakata (Fukuoka) to Shin-Osaka departing at 6:32 am and arriving at 11:12 am. The return trip departs from Shin-Osaka at the slightly more friendly hour of 11:32 am and arrives in Hakata at 4:11 pm. The earlier train will no doubt be quieter, so keep this in mind if you’re traveling at a busy time and really want a pink seat.

The eight-car Kodama service stops at all stations and is slower than the 16-car Nozomi or Hikari services that whiz up and down between Tokyo and Hakata. Four-and-a-half hours for the journey between Shin-Osaka and Hakata is more than double the time of the faster services.

The full station list for the Hello Kitty Shinkansen is as follows:

While the full journey takes over 4 hours, you’ll no doubt spot some familiar names on there that could serve as hopping-off or starting points, and we have some suggestions below.

If you want to ride the train but aren’t sure where to go, there are a surprising amount of great places to visit en route. The most popular place is obviously Hiroshima—home to poignant museums, local soul food and the beautiful floating torii gate of Miyajima.

For something a little more unusual, Shimonoseki is the fugu (pufferfish) capital of Japan—plus it’s filled with fascinating historical spots.

Meanwhile, Iwakuni is known for its arched bridge and has a snake museum, not to mention an unusual local version of sushi.

Himeji and its castle is another great place to explore (and why not explore more of Hyogo while you’re at it?), while those looking for a very short trip can hop over to Shin-Kobe from Osaka and enjoy the delicacies of Chinatown as well as the natural beauty of the area.

Getting on board: Reservations, tickets and passes

The most important thing for Kitty fans is that all the seats in Carriage 2 are jiyuseki, meaning unreserved. That means you can turn up on the day and queue to get a spot. You can reserve seats for other sections of the train, so you can either: a) risk it and go unreserved (saving a couple of hundred yen) or b) reserve seats elsewhere in the train and explore the train once you’ve boarded (possibly a good idea if you are on the train for a while).

When it comes to tickets, you can purchase them in advance or on the day. A full trip between Osaka and Fukuoka takes just over 4.5 hours and costs ¥15,280 for a reserved seat and ¥14,750 for an unreserved seat. If that’s a bit high (and you don’t have a rail pass) then there are some shorter options. Here are some examples of the ticket prices for the different journeys with the unreserved seat price:

All JR West Passes (which include the Shinkansen) and the overall JR Pass are valid for travel on the Hello Kitty Shinkansen. Here’s a full list of your pass options: