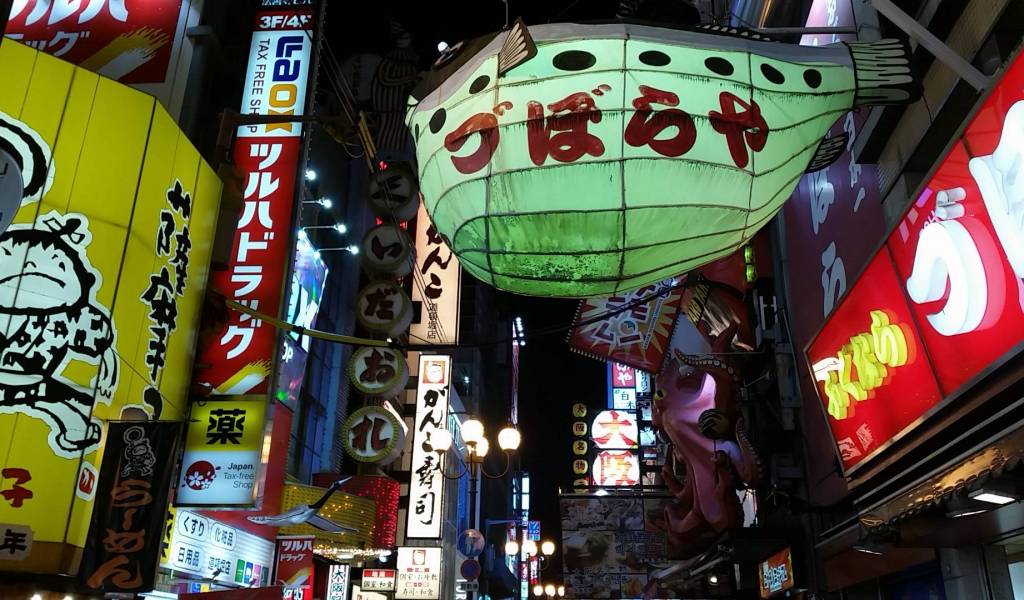 Hitting the Highs in Japan's Kitchen: 10 Things to Do in Osaka

Known as Japan’s Kitchen and home to dozens of weird and wonderful sights, Osaka is the second largest metropolitan area in Japan, but often gets overlooked in favor of neighboring Kyoto.

Originally a vital trade hub with a strong reputation for Edo-period Kabuki and Bunraku theater, Osaka has become one of the most vibrant and interesting places to explore. Stereotyped from as far back as the 18th century as a place full of people who are both incredibly stingy and “devour their food until they collapse”, we cannot think of a city better suited to experiencing Japan on a budget. If you’re looking for some local specialities to try, we have the definitive gourmet guide, but without further ado, here are some of the top things to do in Osaka.

Pro tip: Buy the Osaka e-pass and you can get free access to over 20 Osakaattractions plus a day metro pass for ¥2,000.

1. Feast the senses at Dotonbori (and pose like Marathon Man)

One of the most iconic streets in Japan, Dotonbori is the heart of Osaka, pumping its own eccentric neon energy into the streets around it. The designated entertainment district since 1662, it runs alongside the Dotonbori canal, offering restaurants, bars and clubs.

Best experienced in the evening, you can feast your eyes on the giant illuminated billboards and massive shop figures before feasting quite literally at as many of the restaurants and stands as you can manage. Recreate the Glico Marathon Man pose, drink Asahi beer bathed in the light of its glowing counterpart and stare into the soulless eyes of the terrifying Kuidaore Clown (if you can bring yourself to), just don’t fall into the canal … 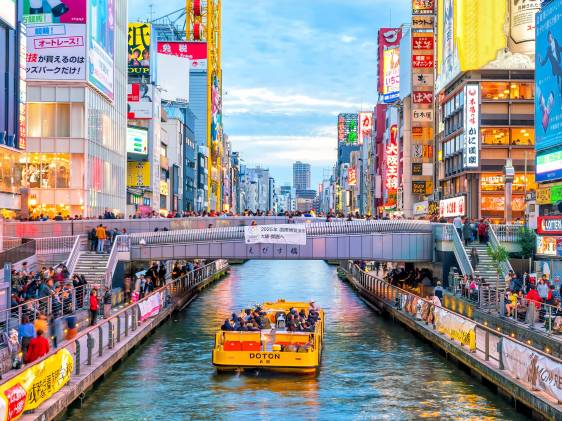 2. Make your own cup ramen

Arguably Japan’s most famous export and worldwide staple of students and strugglers alike (myself included), instant noodles can be traced back to one bankrupted and inventive man in Osaka: Momofuku Ando. With his slightly shady past ignored and his brilliant invention celebrated enthusiastically via bizarre videos, extensive displays and even a reconstructed wooden house, the Instant Ramen Museum in Ikeda allows you, among other things, to create your own personalized Cup Ramen for only ¥300. From the soup base to the toppings to the cup design (and being shamed as you see the incredible manga drawings done by the five-year-old next to you, no doubt) the options are, if not limitless, certainly plentiful.

Tickles your tastebuds? Here’s our full guide to the cup ramen museum. 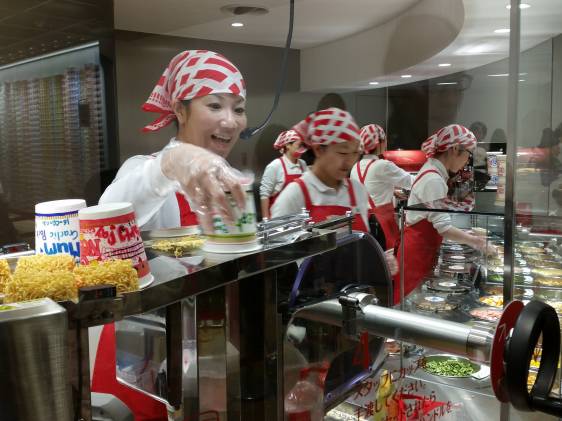 3. See a whale shark at the Kaiyukan Aquarium

If it’s cold, raining or you just really love aquariums, the Osaka Kaiyukan is a great way to spend a long afternoon. Famed for its whale shark, this is one of the largest public aquariums in the world and has a vast array of creatures great and small (as well as some that don’t belong in an aquarium really, but you know, who doesn’t want to see a sloth eat oranges). With giant spider crabs haunting the “Japan Deep” section and a giant salamander slinking around the “Japan Forest”, there is a good dose of Japanese sealife in the mix as well as the worldwide exhibits.

The aquarium hand-stamp re-entry policy also means you can pop out for a cheap lunch at Tempozan Harbor Village, which has over 100 shops and restaurants (and even a Ferris wheel if you’re feeling nostalgic).

The Osaka Kaiyu ticket provides aquarium entry, Tempozan discounts and unlimited Osaka train/bus travel on the day. It can be bought at train stations but NOT at the aquarium. There are different prices depending on which trainline you want to use—the metro version costs ¥2,600, the Nankai Line version costs ¥3,100, and others including Kintetsu, Nose, Keihan and Hankyu are around ¥3,000. You can also buy Kaiyukan tickets online via authorised seller Klook. 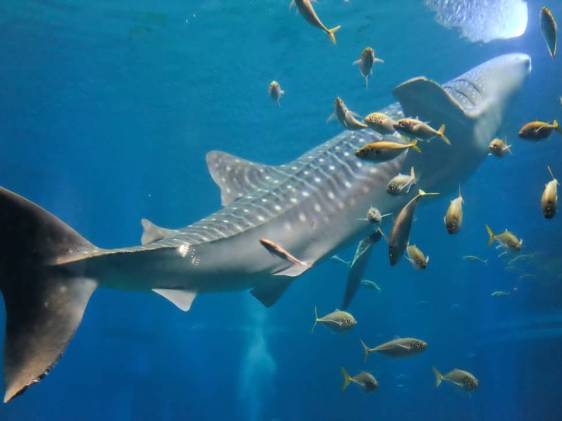 These are some tongue-twister dishes that are worth getting your tongue wrapped around. Originating from Osaka, takoyaki are small balls of batter stuffed with octopus and served with a special sauce, mayonnaise, bonito flakes and aonori (powdered seaweed). Although they are now popular all over Japan, the ones in Osaka are considered the best and are also served slightly under-cooked compared to elsewhere, meaning you’ll be trying them in their most authentic form.

Takoyaki are the easiest to spot of the street foods: bandana-clad chefs deftly flick dozens of half-cooked batter balls on specially made griddles in the street. They are hard to miss and are often mesmerizing. Dotonbori has a vast amount of takoyaki stands and the general advice is to pick the longest queue, as it will most likely be worth the wait.

Okonomiyaki translates to “what you like” and “grilled”—and that’s exactly what you’ll get. It is known as Japan’s pizza, due to its flexibility when it comes to ingredients and is very popular with families.

It consists of a batter mix, chopped cabbage and then pretty much anything you want in the way of meat, fish, cheese and veg as well as options like mochi (glutinous rice cake) and natto (fermented beans). It is cooked on a griddle and served with the same sauce and mayo toppings as takoyaki, but is far more substantial.

The best way to enjoy it is to find a place with griddles built into your table so you can give it a go yourself. (Basically mix it all up in the bowl and tip it onto the griddle!) There are some great places along the river itself and on Dotonbori of course! If you’re heading down to Hiroshima, be sure to try their take on okonomiyaki too.

Pro tip: Allow a local guide to show you the tastiest dishes (and drinks) in town.

5. Cross that bridge when you come to it—at Sumiyoshi Taisha Shrine

A remarkable shrine, Sumiyoshi Taisha was founded in the third century before the introduction of Buddhism to Japan. It is the most famous example of Sumiyoshi-zukuri design, one of three styles considered entirely free from Asian-mainland influence and therefore “purely Japanese”. Enshrining the Shinto gods who protect travelers and fishermen at sea, Sumiyoshi shrines are often found in ports and might be a good place to get a good-luck charm for your next journey.

The most famous element of this shrine is the beautiful Sorihashi Bridge, which arches over the pond in the gardens. As one of the most visited shrines in the country, it is definitely worth a trip, and is entirely free.

6. Enjoy the view from Osaka Castle

Originally completed in 1597, but repeatedly damaged and practically destroyed by numerous battles, lighting strikes, bombs and even Godzilla himself, Osaka Castle is a stunning reproduction of its former self, with some original features remaining. Five floors tall on the outside and eight floors tall within, the TARDIS-like central castle is located on 15 acres of grounds with 13 surrounding structures and all the usual castle-associated things like walls and moats.

The castle is particularly beautiful during the spring hanami season as it is filled with taiko drummers and food vendors and lots of locals camp out for their hanami parties. (Try and get an invite, or just bring your own tarp and picnic—but arrive early to get a good spot, this is competitive stuff).

The park is free to enter and you can wander to your heart’s content. There is a museum within the castle—¥600 entry), which offers great views of Osaka and a very detailed account of the history, and although not everything is in English there is a free audio guide. 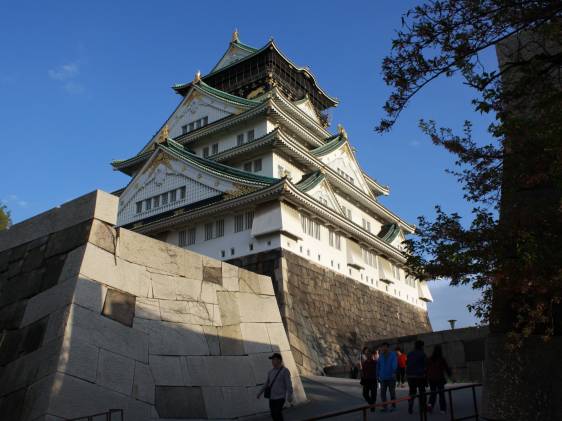 A fantastic example of Japan’s contrasting combination of old and new, Tennoji is home to one of Japan’s oldest temples as well as its tallest skyscraper, not to mention a small zoo (perhaps avoid this) and lovely park.

Shitennoji Temple was founded in 593 and although it has been re-built many times, it has always kept to its original design. The outer temple grounds are free to enter, but small fees are required to enter the inner precinct, treasure house and gardens. With food stalls in the summer and sunbathing terrapins, this is a brilliant place to get back to traditional Japan (and I would recommend the little terrapin-shaped castella cakes on your way out, flicked expertly into bags by a lovely old man, much to the admiration of small children and myself). 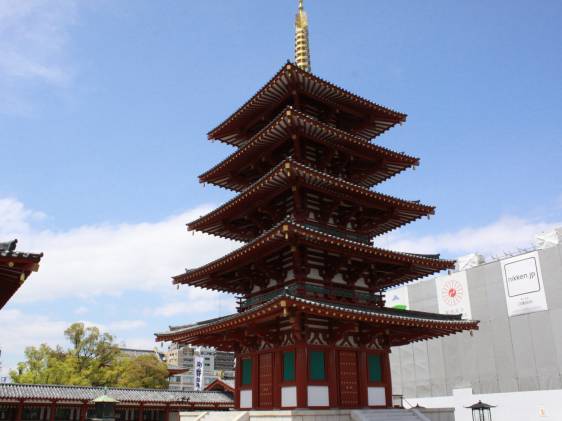 At 300 meters tall, the Abeno Harukas skyscraper offers an art gallery and relaxation garden as well as an amazing 360-degree view of Osaka from the 60th-floor observatory. Directly across from Tennoji Station, it’s impossible to miss, and is open from 10am-10pm. If you’re also keen on USJ, you can combine the two in a discounted package.

Whether you’re into spells, Spiderman or Mario, USJ has something for pretty much everyone. With approximately 12 million visitors a year, the latest of four Universal Studio theme parks has classic attractions including Back to the Future, Jurassic Park and a terrifying Jaws boat ride, as well as more modern counterparts like The Amazing Adventures of Spiderman and Biohazard: The Real. However, one of the greatest attractions is Harry Potter World, complete with Diagon Alley, the Hogwarts Express and a full Hogwarts castle (note there is a related Harry Potter attraction opening in Tokyo in 2023).

You can buy chocolate frogs from Honeydukes and wash them down with butterbeer before trying out a wand at Ollivanders and basically make all your wizarding dreams come true. Lines can be ridiculous though (over four hours for the main Harry Potter ride), so it is best to avoid weekends and holidays if possible.

If the entrance fee is a worry, check out our saving money at USJ tips on how to get the most out of your ticket. 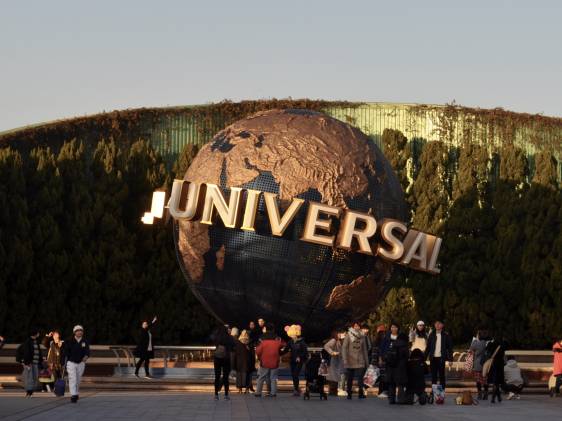 9. Explore in a real-life Mario Kart

Already a popular pastime in Tokyo, you can now take a (currently unavailable). Surrounded by the neon lights of the city, you can ride for either an hour or two hours and visit spots like Namba, Umeda, Nakanoshima and Osaka Castle.

As long as you remember you’re on the real roads and not a race-track, you can have a memorable day seeing the city from a new perspective!

10. Try to avoid cabin fever in a capsule hotel

Ever wanted to experience the true salaryman lifestyle? Are you a fan of small places and feeling like you could be at sea? Then the capsule hotel is for you! Designed to provide budget short-term accommodation to the masses, these hotels offer a very small space (definitely nothing like a futuristic coffin, don’t start thinking about that at 2am) for you to sleep overnight and are often bookable for a few hours at a time.

Often for men only, the best place in Osaka is probably the Asahi Plaza Capsule Hotel, which is mixed with a whole separate floor for women. It has a hot spring bath and laundry facilities and is located minutes from Dotonbori. At ¥2,500–¥3,200 it is affordable and a great taste of a uniquely Japanese concept.

Our full-sized article on this Osaka capsule hotel is here.

Osaka is easily accessible, either from its two airports, or by bullet train or night bus from Tokyo (and other cities in Japan). We have a transport breakdown to help you figure it out. Only half an hour from Kyoto, Osaka is an easy addition to any trip and is not to be missed!

Osaka
Written by: Lily Crossley-Baxter
Filed under: Food and Drink | Places to Stay | Things to Do
Tags:
Sharing